August will always be a time of the year when I spend more than my usual amount of time with Elle.  I have got braver over the almost two years since she died.  This month doesn’t feel, at least so far, quite as deafening as the first August.

I have had a couple of ‘telephone boxes’ since Elle died, and it took me awhile to recognise that I have one here too in our latest lodgings.  They are always outside.  Makes sense.

August got under way with a number of Elle moments, and just this morning I had a flashback to a beautiful memory of Elle that visually will never dim.  It comforts us to know that Elle met both of our black guardians, Zac and Kito. Zac came first in September 2015 and Kito in the December.  We knew we wanted two dogs after Oscar died earlier in the same year.  They were to be of a similar age but not brothers.  I don’t know whether it is true or not, but we were advised against taking two dogs from the same litter.  There is often a hierarchy amongst a litter, and we might just end up with feuding siblings. Zac and Kito, although very different in their natures, are good friends.

This morning a hunter was out in the forest behind us.  Whenever there are loud bangs or lightening Zac becomes a quivering mess, his tail drops, all his usual bravado evaporates, and he starts to shiver uncontrollably.  We can’t think of any experience that he could be remembering.  Kito is not bothered at all.  It usually takes Zac a good hour of stillness before he trusts the world and emerges from his fear.  I was standing in the vicinity of my latest ‘telephone box’, giving him comfort, and into my mind popped the thought that perhaps it causes flashbacks to a terrible moment soon after he joined us.  The accident happened shortly before Kito’s arrival in our lives.  I have a white Toyota Hilux – not a small car, and I was returning from somewhere and carefully negotiating the swing into our carport.  I was moving very slowly because I knew that Zac was around, and having checked where he was, I thought he was safely out of the way.  But he had suddenly changed direction and decided to run around the front of the car.  This part is difficult for me to revisit – that instant when you know that something terrible has happened, and then you hear a stomach-wrenching cry of pain.  As soon as I saw him I knew that there was something very wrong with his hips.  Initially I lost it, and my wailing brought Elle running out of her casita.  She calmed me down instantly with a look, and carefully picked Zac up off the ground.  Even though he was in terrible pain he allowed her to carry him over to our bed of lavender bushes.  She carefully put him down between them, then sat down beside him.  He was instantly calmed albeit still in great pain.  I took myself in hand and managed to get hold of the emergency vet.  I will never forget the sight of Elle and Zac sitting and lying amongst the lavender.  It only struck me this morning that she probably knew exactly what she was doing when she placed him in amongst the lavender bushes – lavender is known to be soothing.  We took him together to the vet’s surgery, and while we waited to be seen, he lay calmly across her knees.  One hip was broken in a couple of places and the other was out of joint.

Zac and I were so lucky that the surgery was successful, although he now has some permanent metal in his one hip.  It was so hard, after the early convalescence, to make sure that he didn’t run.  He was meant to do no more than a trot but he loves to flatten out and run like the wind.  He is now back to being almost as good as new, but we do see the odd hop mid air, perhaps caused by a little ache in his hips now and again.  There are two reasons for our happiness.  We still have our loving, intelligent, mostly brave and cutely self-conscious little boy, and a ‘big brother’ to Kito.  But more importantly, we can return to the moment with no added sorrow, and allow our minds, both Peter and me, to linger over the vision of our beautiful gentle Elle sitting amongst the lavender bushes and under the olive trees, keeping puppy Zac calm and confident in that scary painful moment.  Elle also chose to come with me a week later to collect a much happier Zac.

Our boys, Kito who is never far from my side, and Zac who feels equally tied to both Peter and me, were called upon to give us love and support just under a year later.  And what’s more, we know they remember her too. 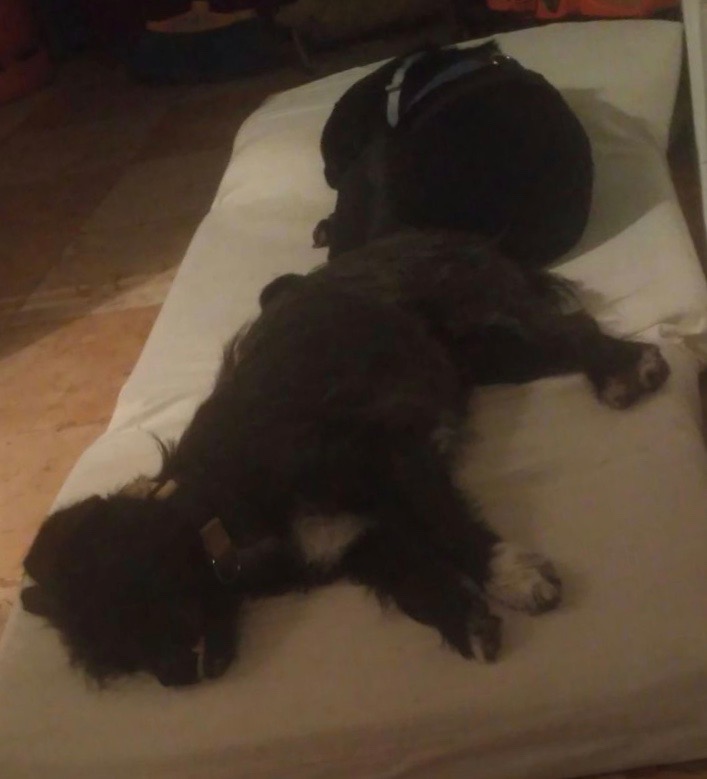